We bought a new Mini Van for Debbie. Her old van had just had enough and needed to be replaced. We bought a new 2007 Honda Odyssey. It's a very nice Ocean Spray Blue. Whatever that means. We got a pretty good deal in Riverside. Damm, I sure hate speeding money though.
at October 21, 2006 No comments:

On the 17th we had a court hearing to determine if Izzy's parents rights would be severed by the court. It was continued at the request of the father's attorney. So in two weeks, on the 31st of October, we'll know more. I really think he's going to try and take her away from us and have a family member take her, or maybe even try to take her himself. I just can't stand to think about her being taken from us although, I know it's a possibility. It makes me want to cry, when I think about how much she means to all of us. I know this has never been a sure thing, but everyone told us it was a done deal and not to worry. I've invested so much of myself into this, and having her pulled away from our family is going to be just devastating. Debbie and Britty are both going to take it hard, and I really worry about them both. I know I'll survive and continue but it's going to be painful. This adoption process has already taken along time and we've already had two children taken from us before. I'm not sure Debbie is going to want to continue. I really want to keep Izzy. She's my little girl.
at October 20, 2006 No comments:

Interesting story in the news

BURLESON, Texas (Oct. 14) - Youngsters in a suburban Fort Worth school
district are being taught not to sit there like good boys and girls with
their hands folded if a gunman invades the classroom, but to rush him
and hit him with everything they got - books, pencils, legs and arms.
"Getting under desks and praying for rescue from professionals is not a
recipe for success," said Robin Browne, a major in the British Army
reserve and an instructor for Response Options, the company providing
the training to the Burleson schools.

That kind of fight-back advice is all but unheard of among schools, and
some fear it will get children killed.

But school officials in Burleson said they are drawing on the lessons
learned from a string of disasters such as Columbine in 1999 and the
Amish schoolhouse attack in Pennsylvania last week.

The school system in this working-class suburb of about 26,000 is
believed to be the first in America to train all its teachers and
students to fight back, Browne said.

At Burleson - which has 10 schools and about 8,500 students - the
training covers various emergencies, such as tornadoes, fires and
situations where first aid is required. Among the lessons: Use a belt as
a sling for broken bones, and shoelaces make good tourniquets.

Students are also instructed not to comply with a gunman's orders, and
to take him down.

Browne recommends students and teachers "react immediately to the sight
of a gun by picking up anything and everything and throwing it at the
head and body of the attacker and making as much noise as possible. Go
toward him as fast as we can and bring them down."

Response Options trains students and teachers to "lock onto the
attacker's limbs and use their body weight," Browne said. Everyday
classroom objects, such as paperbacks and pencils, can become weapons.

"We show them they can win," he said. "The fact that someone walks into
a classroom with a gun does not make them a god. Five or six
seventh-grade kids and a 95-pound art teacher can basically challenge,
bring down and immobilize a 200-pound man with a gun."


The fight-back training parallels the change in thinking that has
occurred since Sept. 11, 2001, when United Flight 93 made it clear that
the usual advice during a hijacking - Don't try to be a hero, and no one
will get hurt - no longer holds. Flight attendants and passengers are
now encouraged to rush the cockpit.

Similarly, women and youngsters are often told by safety experts to
kick, scream and claw they way out during a rape attempt or a
child-snatching.

In 1998 in Oregon, a 17-year-old high school wrestling star with a
bullet in his chest stopped a rampage by tackling a teenager who had
opened fire in the cafeteria. The gunman killed two students, as well as
his parents, and 22 other were wounded.

Hilda Quiroz of the National School Safety Center, a nonprofit advocacy
group in California, said she knows of no other school system in the
country that is offering fight-back training, and found the strategy at
Burleson troubling.

"If kids are saved, then this is the most wonderful thing in the world.
If kids are killed, people are going to wonder who's to blame," she
said. "How much common sense will a student have in a time of panic?"

Terry Grisham, spokesman for the Tarrant County Sheriff's Department,
said he, too, had concerns, though he had not seen details of the
program.

"You're telling kids to do what a tactical officer is trained to do, and
they have a lot of guns and ballistic shields," he said. "If my school
was teaching that, I'd be upset, frankly."

Some students said they appreciate the training. "It's harder to hit a
moving target than a target that is standing still," said 14-year-old
Jessica Justice, who received the training over the summer during
freshman orientation at Burleson High.

William Lassiter, manager of the North Carolina-based Center for
Prevention of School Violence, said past attacks indicate that fighting
back, at least by teachers and staff, has its merits.

"At Columbine, teachers told students to get down and get on the floors,
and gunmen went around and shot people on the floors," Lassiter said. "I
know this sounds chaotic and I know it doesn't sound like a great
solution, but it's better than leaving them there to get shot."

Lassiter questioned, however, whether students should be included in the
fight-back training: "That's going to scare the you-know-what out of
them."

Most of the freshman class at Burleson's high school underwent
instruction during orientation, and eventually all Burleson students
will receive some training, even the elementary school children.

"We want them to know if Miss Valley says to run out of the room
screaming, that is exactly what they need to do," said Jeanie Gilbert,
district director of emergency management. She said students and
teachers should have "a fighting chance in every situation."

"It's terribly sad that when I get up in the morning that I have to
wonder what may happen today either in our area or in the nation,"
Gilbert said. "Something that happens in Pennsylvania has that ripple
effect across the country."

Burleson High Principal Paul Cash said he has received no complaints
from parents about the training. Stacy Vaughn, the president of the
Parent-Teacher Organization at Norwood Elementary in Burleson, supports
the program.

"I feel like our kids should be armed with the information that these
types of possibilities exist," Vaughn said.
at October 16, 2006 No comments:

Tomorrow we find out, if Izzy is going to be ours forever. The judge is going to rule if her birth parents loose all rights to her. If they do, it is just a matter of time, before she is ours and she has my last name. If they keep Izzy, then it's over for us. Everyone has told us, it is a slam dunk case and not to worry. I really think it is a done deal, but in the back of my mind, I still worry.
at October 16, 2006 No comments:

Another morning and the fire is still going. #AppleFire 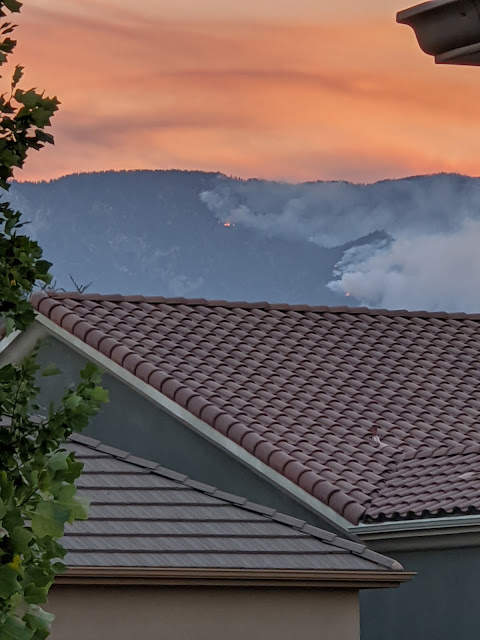