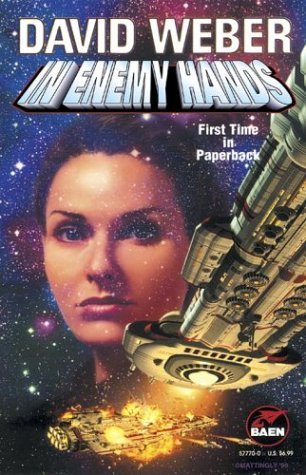 Honor Harrington has faced ship-to-ship combat, assassins, political vendettas, and duals. She's been shot at, shot down, and just plain shot, had starships blown out from under her, and made personal enemies who will do anything to ruin her, and she's survived it all. But this time the People's Republic of Haven has finally found an admiral who can win battles, and Honor's orders take her straight into an ambush. Outnumbered and outgunned, she has jut two options: see the people under her command slaughtered in hopeless battle...or surrender them--and herself--to the Peeps.At least the Peoples Navy promises to treat its prisoners honorably. But the Navy is overruled by the politicians, and Honor finds herself aboard a Peep battlecruiser, bound for a prison planet aptly named "Hell."..and her scheduled execution.

Put into solitary confinement, separated from her officers and her tree cat Nimitz... and subjected to systematic humiliation by her goalers, her future has become both bleak and short. Yet the one lesson Honor Harrington has never learned is how to give up.
at June 18, 2013